Get instant property alerts for www.wmasshomebuyer.com

In Hampden County, Massachusetts there is a remarkable suburb of Springfield known as Wilbraham. The Town of Wilbraham is part of the Springfield Metro Area and is home to around 15,000 residents. The town includes the census-designated place by the same name. Initially divided into Wilbraham and North Wilbraham, with the latter having its own zip code and encompassing the industrial part of the community which lies along the Boston and Albany Railroad Line. The railroad line is still in use today, however, that area is no longer referred to as North Wilbraham, nor does it have its own zip code.

Within this exceptional suburban town, you’ll find multiple neighborhoods including North Wilbraham, South Wilbraham, East Wilbraham, Wilbraham Center, Wilbraham Mountain, the Pines Section, and Boston Road Corridor. All in all the town is comprised of 22.4 square miles and is bordered by Ludlow on the north, Palmer on the northeast, Hampden on the south, East Longmeadow on the southwest, Morson on the east and Springfield on the west. The Town of Wilbraham lies within both the Central Upload of the state, as well as the Connecticut Valley Lowland. Wilbraham also encompasses Mt. Chapin, Mount Vision and Wigwam Hill, all peaks in the gorgeous Wilbraham Mountains range.

In addition to a great location, wonderful neighboring communities, and picturesque scenery, the Town of Wilbraham also has fabulous options for shopping and dining, entertainment and recreation. Furthermore, the community is appealing to homebuyers with children as students here are served by the Hampden-Wilbraham Regional School District which includes the well-respected Minnechaug Regional High School. Whether you are a family with children, retirees, young professionals or somewhere in between, there are spectacular real estate opportunities in Wilbraham. Homes for sale in Wilbraham include properties of varying sizes and architectural styles. Wilbraham homes range from small, efficient, low-maintenance homes to large and luxurious family estates. If you would like to learn more about the available real estate in Wilbraham, Massachusetts, please allow us to assist you.

Are you considering selling your Wilbraham Home?

$399,000
4 Beds ⋅ 2 Baths ⋅ 73073196 MLS
Here it is! A 4 bedroom in Wilbraham with an inground pool. Property comes with a storage shed and all the pool accessories needed to enjoy your summer fun right at home. The grounds are beautifully landscaped and waiting for your Spring plantings. This is the perfect home for those with children looking to get into the Hampden-Wilbraham School System. This home also set up well for those who work at home. This property is easy to show and waiting for its new Owner to make it their own.

$615,000
4 Beds ⋅ 4 Baths ⋅ 73073104 MLS
You won't want to miss out on this incredible 4bd 4bth 2400+ sq ft home located in one of the most sought after neighborhoods. From the moment you pull up you will have city views & the incredible Fern Valley Farms located just beyond the beautiful tree lined backyard. This house boasts a wonderful open concept first floor featuring a stunning two story foyer, fully applianced kitchen, half bath ,bedroom and laundry on it as well.Upstairs you will find the master with an incredibly large walk in closet & bathroom, down the hall another full bath and two more nice sized bedrooms. The basement is sure to satisfy as well featuring a large open space suitable for any of your needs along with a full bath and direct access off the garage. There is ample space , storage and possibilities along with new flooring in all bathrooms, laundry & mudroom new faucets throughout , freshly painted solid oak kitchen cabinet's, vanities & garage, portable house generator & NEW SEPTIC

$780,000
4 Beds ⋅ 4 Baths ⋅ 73073010 MLS
STUNNING NEW CONSTRUCTION RANCH! This house is located in a private neighborhood with an oversized 3 car garage. BEAUTIFUL scenic views of woods, and a sprinkler system installed outside. This home has an OPEN FLOOR PLAN featuring a main living room area with a fireplace, exterior deck, beautiful kitchen with floating island and white ceiling to floor cabinets and a half bath. Head into your dining room area with beautiful windows and pendant lighting that will blow you away. On the main floor you will find the master bedroom with a luxury bathroom including a tiled shower, soaking tub and a walk in closet. 3 large sized bedrooms are also on the main floor with another full bath, hallway closet, and laundry room. Head into your fully finished basement which has a walk out leading to a covered patio. In the basement you will also find 2 huge bonus rooms that can be used as desired, an open living area and additional laundry hook ups. This home is a must see - YOUR PARADISE AWAITS!

$249,900
3 Beds ⋅ 1 Baths ⋅ 73070958 MLS
This house was built in 1760. This antique house needs work but already has a newer private artesian well and tank, a newer hot water tank and a newer propane force air heat. It also has Circuit breakers and some newer windows. Septic works but will not pass title 5 and Roof does not currently leak but could use replacement soon. Best for handy man/contractor and or investor. Bring your ideas to bring this Antique home back to life. Easy to show.

$245,000
73069717 MLS
Take a look at this exceptional piece of land located in North Wilbraham. With multiple level spots to build, this piece of land has so much to offer; various lot configurations, water views, recreational activities, wooded privacy, and wild life. Drive by, or *request* to walk this lot and enjoy all the scenic views 9V Red Bridge Road has to offer!

$750,000
4 Beds ⋅ 4 Baths ⋅ 73066210 MLS
Great opportunity to buy in this Wilbraham neighborhood! This 4 bedroom, 3.5 bath Laplante built home is conveniently located to all the town has to offer. The 3 car oversize garage will house even your full sized vehicle with room to spare. Once in the home you will find custom woodwork and cabinets. Vartanian custom cabinetry in the kitchen, bathrooms, and dining area. The kitchen will be the dream of the chef of the family. Solid Cherry cabinets, granite counters with plenty of counter space. Open floor plan to gather together for special events. Living room has a gas fireplace and doors out to the private backyard. First floor also has the formal dining room, an office, a mud room with laundry, and the master suite. The second floor has two more bathrooms, 3 bedrooms and a finished bonus room as well as a large unfinished room above the garage. The heated carriage house is currently a basketball court with a regulation hoop and some Minnechaug flair. A MUST SEE!

$1,999,999
73065667 MLS
Wilbraham - acreage with the ability to develop. This parcel of land abuts Wilbraham Country Club and is very flat and open. One could live right on the edge of the fairway of one of the fairways. The opportunities are endless for what one could do with the property. It would make an excellent equestrian center with ample room for an indoor riding arena and plenty of open outdoor riding as well. The property produced quality hay for many years and the fields will continue to produce if that was desired. This parcel would also make a wonderful hobby farm right out your own back door. Come build your dream home and work the land and raise all your own fruits and vegetables as well as any livestock that you would like to manage. This is truly a once in a lifetime opportunity to own such a spectacular piece of property in Wilbraham. This has been in the same family's ownership for a lifetime. Buyer should do their due diligence and verify all property potential uses with the town.

$1,200,000
73063794 MLS
Rare Opportunity in one of Western Massachusetts premier communities. 98 Acres of elevated, waterfront land with many possibilities. Frontage lots are available. The options are unlimited with multiple uses available including, Single family sub division, condo project, solar farm or a mix of many. Buyer to verify all uses with Town of Wilbraham. Amazing One of a Kind Wilbraham Location with Elevations Waterfront Property on the Chicopee River and MA Pike. A short distance to Red Bridge State Park with trails & boat ramp. This one of a kind property has easy access . Lets discuss all options today.

$309,900
2 Beds ⋅ 1 Baths ⋅ 73058945 MLS
Charming, move in ready ranch, with an oversize 1 car garage, located on a 3/4 acre picturesque corner lot. Central Location, this lovely two bedroom home is light and bright with a fireplace in the living room, with built-in bookcases, and hardwood floors. Kitchen features updated cabinets, breakfast bar for morning coffee, and all appliances, and a pantry closet. Open floor plan to dining room with a large bay window overlooking spacious private yard. Also features a french sliding door to an extended spacious deck. Family room which has several windows viewing deck area amd backyard. Entry area of home features a mudroom with a separate first floor laundry. Additional separate area, outside of master bedroom, that was used as an office or sitting area. This home has gas heat, central air, a basement with a bulk head to the back yard. Great storage in the pull attic. There are several flowers and plants that bloom from spring to fall. Basement used for mechanicals and storage.

The data relating to real estate for sale on this website appears in part through the SMARTMLS Internet Data Exchange program, a voluntary cooperative exchange of property listing data between licensed real estate brokerage firms, and is provided by SMARTMLS through a licensing agreement. Listing information is from various brokers who participate in the SMARTMLS IDX program and not all listings may be visible on the site. The property information being provided on or through the website is for the personal, non-commercial use of consumers and such information may not be used for any purpose other than to identify prospective properties consumers may be interested in purchasing. Some properties which appear for sale on the website may no longer be available because they are for instance, under contract, sold or are no longer being offered for sale. Property information displayed is deemed reliable but is not guaranteed. Copyright 2023 SmartMLS, Inc. 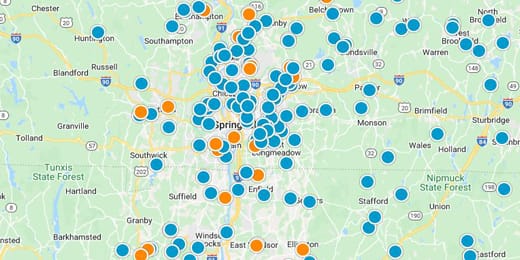